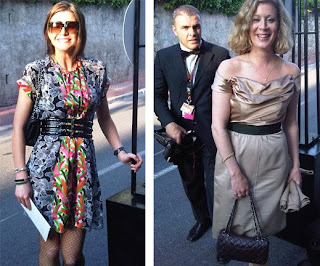 Where: House at… Cannes
Pic one: Dressed for dominoes
Pic two: My friend Kelley looks the part in Dolce & Gabbana, with Chanel bag.

The luck of the Irish certainly came in handy at Cannes’ star-studded Domino tournament. Dressed in Duro Olowu, with my favourite Alaia belt, fishnets, boots and a Chanel bag, my friend Kelley and I were treated to a night of French decadence – not to mention a few vodkas served in glasses carved from ice.

Held at The House at Cannes, a beautiful 100-year-old private residence, the tournament proved that Dominoes is popular among the A-listers. Penelope Cruz, who was joined at the charity event by Orlando Bloom and Lily Cole, looked stunning in her white John Richmond dress – even though she was suffering from flu. But it was David Furnish who had the best night – walking away Domino champion, with some jewellery, vodka and sevruga caviar. I’m sure Elton John was pleased!