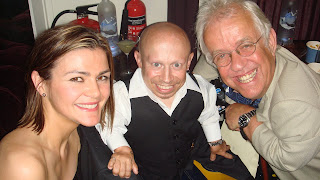 Joanne Black @ the In house screening of Time Bandits

It’s not every Monday you get to spend the evening in the Fortress of Darkness – containing Absolute Evil and a boy called Kevin – wearing Prada and surrounded by a whole host of stars. But earlier this week, at the Electric’s screening of the 1981 film Time Bandits, I did just that.

In the company of the film’s director and writer Terry Gilliam, who looked effortlessly stylish in jeans and a black jacket with rolled up sleeves, it would have been difficult not to have a fantastic evening. The film itself was great, and the Monty Python aspects reminded me of the time of I went to see Monty Python and the Holy Grail on Broadway with friend and producer Dany Wolf. 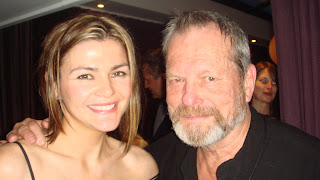 I remember it so well because I happened to be sitting under the Holy Grail and ended up being taken on stage to sing with the cast. It was very surreal.

It wasn’t only Terry, however, who put in a show-stopping off-screen performance. Lily Cole looked like Botticelli’s Venus in a cream figure-hugging lace dress; actor Mike Edmonds – who played Og in the movie – paired an interesting navy shirt covered in flowers with a beige jacket; GQ editor Dylan Jones opted for a sharp suit and Verne Troyer (aka Mini-Me from Austin Powers) wore a pinstripe waistcoat with a white shirt, hoop earring and diamond Rolex watch. Thankfully, I managed to escape unscathed from Absolute Evil’s lair, but I’m not sure Monday nights will ever be the same again!