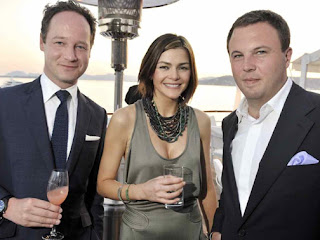 What Charles Finch doesn’t know about fabulous parties and dressing to impress, just isn’t worth knowing. Described as the ‘Cannes-do guy’ by the New York Times, Charles is a great host with a great guestlist – including Mick Jagger, Ralph Fiennes and Rachel Weisz – not to mention an intimate understanding of the good life.

Bellini cocktails and beautiful scenery aside, the Finch Quarterly Review party became, for me, an evening dedicated to fashion. Dressed in Bottega Veneta, with a YSL clutch, mix of necklaces from Bottega Veneta, Yara and Portobello Market, and Links’ NSPCC bracelets, I admired both the looks and the good-looking. Sidney Finch wore a fantastic white L’Wren Scott dress and L’Wren Scott herself donned one of her own white figure-hugging designs – with Mick Jagger sporting a rather striking striper blazer.

When I wasn’t spotting fashion, I was talking about it. First it was men’s styling with GQ Magazine’s Bill Prince. And I even ended up sharing my love of YSL clothes with French-speaking designer Michael Barnes. Thankfully, Michael’s friend and interpreter Pascale was on hand to keep the conversation flowing – otherwise I’m not sure we would have got much further than a ‘bonsoir’ and ‘bon nuit’.